AI is all the hype these days, so we asked what AI thought of Mudlet’s logo… apparently it is a statue of a giraffe in front of a waterfall. That’s not relevant to today’s release, but we thought you’d be interested in knowing this! Features in this update include a dark theme toggle, addition of MUME, Discord button to open the game’s server, and additional text wait time is now adjustable!

edru2 added a dark theme to Mudlet! You can how select it in settings:

vadi2 followed the option up with a feature to follow your system setting and to also update your editor theme. 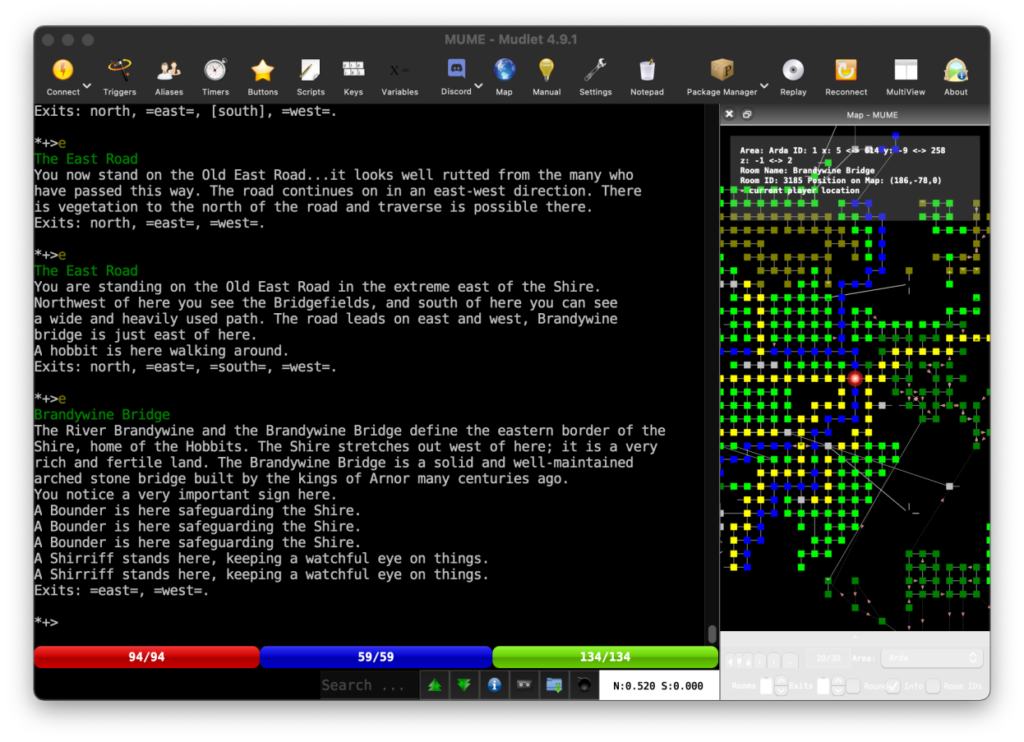 Multi-Users in Middle-earth (MUME) is a highly competitive world PvP DikuMUD, set in J. R. R. Tolkien’s fictional world of Middle-earth, as described in The Hobbit and The Lord of the Rings, where players may choose to join the epic war between the forces of Sauron and the armies of the Free peoples. In MUME players can explore, role-play, acquire achievements, and complete quests across many challenging locations across Middle-earth such as Lothlórien, the Shire, Bree, Rivendell, Goblin-town, Mirkwood, Dol Guldur, and the Mines of Moria. The game is completely at no cost to play and has been continually enhanced since its inception in the fall of 1991.

atari2006tim worked on the Discord button! Games can now tell Mudlet what their Discord invite is, and once they do so – Mudlet will show a button that’ll take the player to straight to the game’s Discord server 😃

SlySven has done work on the text wait timer for games that lack Telnet GA or EOR signalling and made it configurable in settings. By default this timer was 0.3s, which you can now lower or increase as needed.

Why do we even need to have it? Well because not all games are telling Mudlet when they are done sending all text. That’s exactly the meaning of GA. Games that do implement GA have no timer at all. Thus the better solution is, of course, to encourage games to implement GA!

Lowering the timer runs the risk that not all text will be received from the game before showing it on screen, which could ‚break‘ your triggers for that particular line. Increasing the delay reduces that risk, but then of course the experience is compromised.

Quality is an important area of Mudlet, and alongside the newly created QA team, vadi2 has worked on automating Mudlet to run our Lua tests! Now whenever an improvement is done to our Lua functions, a copy of Mudlet is launched automatically in the cloud and all existing Lua tests are run to ensure nothing breaks. This also gives a safety net to anyone working on Mudlet that should they break something on accident, it’ll get caught. That said, the safety net needs to be expanded to cover all tests – so we’d love for volunteers to help strengthen it.

That’s not all on the quality story, either! vadi2 also worked on setting up visual tests that ensure the Mudlet interface itself – one you see and play with – is tested. Similar to Lua tests, automation launches Mudlet in the cloud and follows a script to click around on buttons and observe that they do what they ought to do. It is relatively intuitive to setup these tests, and we’d also love it if we had more volunteers to help flesh them out:

We announced earlier a trial to pay a bit of money for the top 3 most popular PRs – well it’s kicking in with this release! Head over to the form to vote on your favourite improvement in this update.

Anyone who submits an improvement to Mudlet is eligible for a spot on the poll. That said, this is still an experiment we’re trying out so we might change or scrap it in the future if it doesn’t work out.

There’s a lot of improvements in this Mudlet update besides the top 5 listed above, so dig into the changelog below to find goodies:

4.14.1 fixes tab characters showing up in the code editor.