itsTheFae added the ability to change the font size in userwindows – and additionally miniconsoles or the main window – with setFontSize():

getFontSize() is also available to retrieve the current font size.

You can now enable the case-sensitive search when searching in the editor thanks to the veteran Mudlet contributor SlySven.

Clicking on a search result will now actually focus on the search result itself now, be it whenever inside a script, a trigger pattern, or – new for 3.4 – the event handler the script is for. Previously, it search would just take you to the right item but not show you where exactly it was.

Additionally, a clear button has been added to unhighlight all search results:

The display has been tweaked slightly and the patterns are numbered from 1-50 instead of 0-49 as you’d normally expect when counting things: 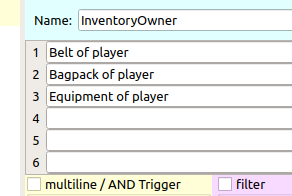 SlySven has also improved the look’n’feel of the script editor, organising the timer and variables layouts:

As well as aligning trigger/alias/script/etc’s name to be consistenylu called “Name” and a plain command to send as “Command”:

Fixed a crash with installModule()

If you opened and closed the modules dialog and then called installModule() from a script, Mudlet would crash – this is now fixed thanks to SlySven.

demonnic brought Geyser’s gauges into alignment with createGauge() , text in set on a gauge will always stay centered now.

We’ve fixed the AppImages to extract correctly on Debian OS.

You can now use the Ctrl+/ shortcut to toggle commenting in the code editor thanks to the work by gamecreature:

Normal cursor on the profiles window

When you launched Mudlet and didn’t have any profiles enabled to autoconect, the profiles window came up – but the cursor was stuck in the ‘loading’ state. This has been fixed up by vadi2.

Following a tip-off on the forums, keneanung fixed a case where Mudlet wouldn’t properly multiple MSDP arrays inside another array.

Mudlet now uses the C++11 nullptr keyword all throughout the codebase and several Qt conventions are now better followed.

vadi2 released a video walkthrough of getting setup with developing Mudlet on Windows. Mudlet is a project made by people like you & me – and it all starts with getting the code, making Mudlet run, making a tweak and seeing what you break!

We encourage you to have a go at messing around with Mudlet – any improvements, big or small, would make this free and open project better :)

Don’t forget, the previous release introduced a new editor that has 300+ skins, allows for easier indenting, and has multi-cursor selection! If you haven’t updated to a newer Mudlet already, now’s the time to do so.