May is here, and a new Mudlet is here!

If you play Mudlet on Windows with wifi, and you’ve had occasional spikes of lag – it could have been caused by Mudlet. This release fixes it!

If you’re still getting lag after upgrading, then it’s something else 🙁

Thanks to bbailey for finding the issue and figuring it out.

Small toolbars are back

Like your icons small? SlySven made them now available again! 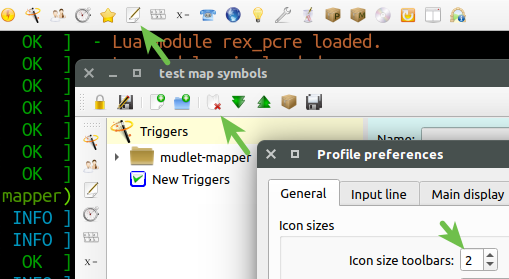 If you have a variable named ‘goto’ and format code, the formatting wouldn’t work and the code would be cut off. Keneanung fixed this! However, ‘goto’ is used by the next version of Lua, so do not use it and rename any existing code that uses it since it won’t work in the future.

setFont() and getFont() are here! You can now use them to change the font in a miniconsole or a userwindow from the default Bistream Vera Sans Mono. Credit to Vadi.

Klendathu added that one in. Got a handy function you think will benefit from being in Mudlet? Get in touch!

Keneanung has put in a ton of work updating all of the 3rd party open-source libraries Mudlet is built on, ensuring we’re using the latest and greatest stuff :)