Spring is here in the Northern Hemisphere and so is a new Mudlet release!

SlySven has put a fair bit of improvements into the 2D map: 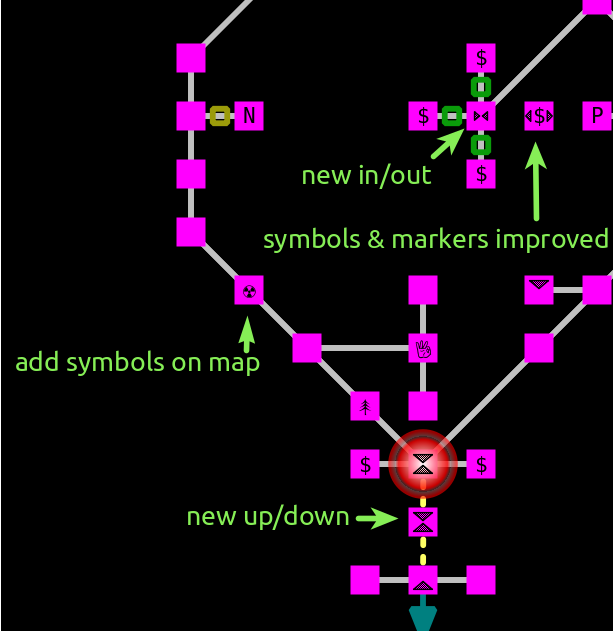 In/out/up/down exits now look a lot better and play nicer with the room symbols. Speaking of room symbols, you can now set them to Unicode characters or entire words!

We’re placed to announce the addition of two awesome MUDs to the connection tab: Luminari and Reinos de Leyenda!

Luminari MUD has a cool Mudlet UI + automapper setup, check it out.

Luminari is a deep, engaging game set in the world of the Luminari – A place where magic is entwined with the fabric of reality and the forces of evil and destruction are rising from a long slumber to again wreak havoc on the realm. The gameplay of Luminari will be familiar to anyone who has played Dungeons and Dragons, Pathfinder or any of the many RPG systems based on the d20 ruleset.

With over thirty thousand rooms and an expansive wilderness, you will never run out of places to explore.

While exploring, gather resources and use them to craft interesting, unique and powerful items for use in combat and role-play.

Reinos de Leyenda is an awesome Spanish-speaking MUD that is fully supported with Mudlet 3.8.0!

Realms of Legend is an online role-playing game in Spanish completely free. It has no requirements, it is accessible and multiplatform; The online multiplayer game to live the experience closest to the real RPG!

The game tells the story of Eirea, a fantastic world where the gods fight among themselves for total control of the Material Foreground using heroes, like you, as their tools.

The game in text mode will make you immerse yourself in the game in a way that you had never thought before and will allow you to interact with your characters as you have never done before; In addition, its nature makes it a multiplayer game that can also be played blind.

Enter the world and create your character! You can personalize it among dozens of races, classes, religions, citizenships and trades. Leave your mark on the Realms of Legend!

Triggers and aliases for other languages

Mudlet triggers, aliases, and the variables tab now work with non-English languages! There’s still more work to do, such as getting text selection working right, but we’re making steady progress on the goal for 4.0.

You can now use  : to have all open profiles do the same command! For example, doing :hello or :follow bob will have all of your characters send “hello” and “follow bob”, respectively.

Try this out with a new profile, and to enable this on existing profiles, install this script.

Mudlet will also now bold other tabs if you get new text on them!